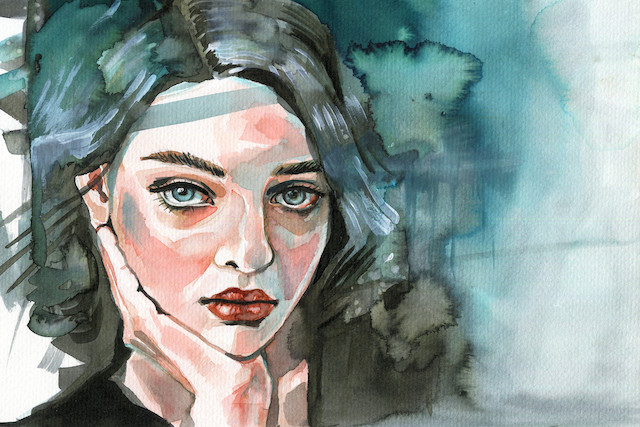 “True forgiveness comes when you realize there is something totally radiant inside you, that nobody could ever touch” ~Eckhart Tolle

I grew up in an emotionally abusive household.

My father was a man who diligently provided for us, but he left me with scars and shattered self-esteem.

My mother cooked me my favorite foods and let me sleep in her bed when I was scared, but she attacked my insecurities when I frustrated her. My friends played nasty pranks, but she wiped my tears as we both tried to survive my religious, cult-like school together.

As a kid, I didn’t have the tools and mental maturity to deal with these complicated emotions. Everything was black and white. I couldn’t understand that people were a big, beautiful, and sometimes toxic mess of gray. After a year-long depression, I discovered the Internet, and I wanted to start healing.

All the articles suggested forgiving, and I’m glad I ignored that specific piece of advice, because it’s much more complicated than that.

I decided to focus on healing instead, and a crazy spiral started. There were a lot of extremes, a lot of tears, and a lot of perfectionism. But there were also love and joy, friends, and moments of incredible peace.

Six years and one day later, I woke up and realized I didn’t obsess about my parents anymore. I could see them as people and forgive them for their cruel actions. I could set boundaries without getting subsumed by a tunnel of rage, and after a nasty fight, I could calm down and let go of any hard feelings.

How on earth did I manage this?

Trauma runs deep. There are lasting effects, and we’d be fools to not acknowledge them. Even mental health professionals admit that the goal of recovery isn’t to remove the side effects, but to live in the present without being completely overwhelmed by the past and future.

And for quite a lot of us, it hurts.

It hurts for the teenage girl who spent her high school years struggling with depression and eating disorders because her family criticized her weight.

It hurts for the boy who battled anxiety all his life, and his existing condition was only exacerbated by terrifying bullies and an unstable home environment.

It hurts for me, a girl who lost years of her childhood to anxiety and fear, and never felt safe around her father.

For a long time, I kept searching for a path where I could back-pedal. Hold up, let’s forget about the trauma and depression, can I just be a normal kid? Visit friends and insult their slime collection, and laugh about memes, and cry and fall in love? Can my diary be filled with boy-crushes and silly things, instead of obsessive questions begging me, why are you so lazy? Why are you so sad, and depressed, and ugly—

And that brings me to my next point.

Don’t get trapped in your abuser’s patterns, and don’t give your power to them.

At first, I tried to fix myself. I filled pages with goals among goals. Get slimmer thighs. Talk less. Stop forgetting stuff. Stop fidgeting. Stop being lazy. Stop being yourself. Stop. Stop. Stop.

I was a kid. Your entire world, your survival, depends on two very flawed human beings feeding and clothing and raising you. I thought that maybe if I were better, they’d treat me better.

But eventually, I stumbled upon an article about abuse. There was this checklist activity, and I checked off twenty bullet points. “Congrats! You’re a survivor…”

I’m not the problem, I thought, staring at the screen. They’re the problem.

So, I went down a new road. Instead of trying to fix me, I tried to fix them , and when I inevitably failed, I was angry about the awful way they treated me

My parents used this rage as another bullet in their gun.

“Have you ever seen such a rude child?” “F*cking insane” “I’m just trying to speak nicely, stop yelling!”

And they kept shooting at my heart, every time I said stop.

“Stop commenting about my ugly skin and my weight. Stop saying I’m a failure, that I’ll never succeed in life. Stop rolling your eyes at me every time I make a mistake, or I forget something.”

But they wouldn’t stop. Trying to fix them was worse than trying to fix me. Why? Because you can’t find closure from other people. You can’t control their actions.

After the hundredth argument, I was sitting next to my bed. And then it hit me. They would never look me in the eyes and say, “I’m sorry, I’ll try to change.” Every time I tried to talk about my vulnerabilities, they would rip the wounds open and rub salt and lime into the blood. I would never get the closure I needed from them.

I sat there for a long time. The tears dried on my face. And then I opened my journal, and wrote, “Dear Diary, I’m so tired…”

Love yourself during the journey.

I kept postponing my happiness. I kept waiting for two flawed people, who mentally, emotionally, and sometimes physically abused me, to change so I could finally move on. As a result, I never really tried to heal by myself.

When I opened that journal, I still operated from the belief “I wasn’t good enough” and I needed to be “better.”

I tried to have the perfect body. I was terrified to eat carbs and treat myself to a nice meal. I tried to be the perfect artist. At one point I loathed all the writing I’d ever made and threw away entire notebooks.

It took me a long time to realize, there is no “better.” Are there milestones and visible signs of growth? Absolutely. For as long as I’m a human, I’ll struggle. So, I better start loving the imperfect soul I was given or die in the pursuit of “better.”

This is why I encourage you to start taking care of yourself. Take the pressure of perfection off your shoulders.

As an abuse victim, I tried to smash myself into a shape without insecurities so I’d never feel sadness, never cry while sitting on the ceramic toilet ever again.

The journey is long. I’m still walking it. But every day, there are small opportunities to practice self-love and give yourself rest.

These days, when I make a mistake, I still berate myself, but there’s a new voice, saying, “Don’t call yourself an idiot.”

It tells me to go outside and get some fresh air when my brain’s being overloaded by my parents’ screaming voices and the TV fuzz. It tells me, “Things are going to be okay” when I’m recovering from a panic attack. It gives me strength when I want to do nothing more than give up.

There are loads of ways to build a compassionate inner voice. Journaling, saying kind words to yourself in the mirror, complimenting your work before you attack it for its flaws. It’ll take time. It did for me. But slowly, the critical editor quieted, and I felt better about myself.

Find an identity outside of your pain.

I wrote short stories, painted my first portrait and just delighted in mixing the colors, and I read blogs and books and laughed. Every day, I woke up and just tried. Sometimes I failed and fell into my spiteful patterns. And other times, I succeeded, and caught the cruel thought in my head, and dismissed it.

I fed stray cats in my neighborhood. I watched Good Omens and read more Terry Prachett books. I took walks and I improved myself, not from a place of inadequacy, but from a place of kindness and self-love.

I journaled these experiences, and as I read my previous entries, I realized three things.

2. I’m an artist, a sister, a writer. I’m the girl who plucks dandelions from the grass near the lake and throws shells into the water. I’m the person who keeps my cat from eating plastic wrappers, and who helps my brother with his homework and comforts him when he’s crying. I’m the person who doodles millions of feathers, and faces, and earrings in the margins of her history homework.

3. The abuse has affected me. It is a part of my life. It bleeds into my work and the themes I communicate.

My talents and intelligence, they weren’t diminished by the mental abuse. I’m still a radiant person worthy of love and appreciation. These should be obvious concepts, but recognizing these things lifted a load off my shoulders—a load of resentment. And it comforted the deep fear I was never going to be healed. That I was always going to be a little broken, a little empty.

But when I wrote down all of these experiences, I realized there were vast expanses of my soul my parents could never taint. There’s still pain. I think there’s always going to be pain; it’s a simple fact of life. But now I can comfort myself. I can feel those emotions and move on, without attaching the label “broken.”

Forgive because you need the space.

I forgave them because I didn’t want to keep lugging them around, like a suitcase of rotting garbage. But it was the last step of a long, long process, where I repeatedly had to revisit my trauma, accept hard lessons, and integrate them into my sense of self.

If I had tried to forgive right from the beginning, it would’ve been a stupid move. I would have constantly justified their sh*ity behavior, since “everyone has flaws, you should forgive and forget so you can maintain a relationship.” And I would’ve never discovered the power of my grief and my rage.

Right now, after I did the hard work of healing and gaining distance from my pain, I can forgive them. And when I say I forgive them, I mean I no longer obsess over them. I do get angry. But it’s me setting boundaries and protecting myself instead of my wounded soul lashing out. I may cry during a particularly bad attack of self-doubt, but I no longer waste energy trying to blame them.

Sometimes, I want to hate them uncontrollably again. My father robbed me of my self-confidence, when he should’ve been building me up. I have this subtle, resigned voice that’s convinced I’ll never amount to anything, and it’s a permanent part of my psyche.

But forgiveness has opened so much space. Space to process anxiety and tears. Space to fill with love and memories of friends. Space to just exist. And going back to my old ways, where I tried to get them to change, get them to realize how much they hurt me, it feels like putting a noose back on my neck.

So that’s how I forgave. By healing. By loving myself. By learning how to handle my hard emotions and finding an identity outside my pain.

Don’t rush yourself to forgive. Society says it’s the right thing to do, be the bigger person. But let me tell you that’s bullsh*t. If you’re just out of an abusive relationship, your version of forgiveness might be constantly excusing their toxic behavior and sacrificing your needs. Heal first. Make art, take baby steps to build healthy relationships, and above all, give yourself time.

And when it’s the right time, forgiveness will come.

LaBrava Altonia lives in the crazy state of Florida with her crazy calico cat. She writes every day, hoping to find truth through her stories. She’s still not quite sure how her life is going to pan out, but she can finally let go and trust that the universe will put her on the right path.

The post Why Forgiving Is the Last Step in The Process and What Comes First appeared first on Tiny Buddha.