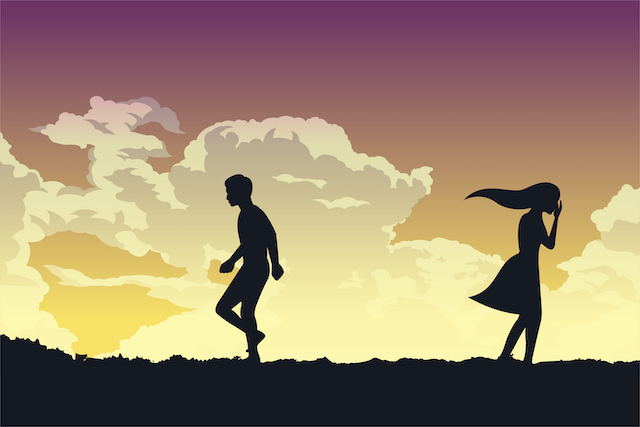 “No one can make you feel inferior without your consent.” ~Eleanor Roosevelt

When it comes to dating, I have always been drawn to people who made me work for their love and validation. Despite the fact that I, like anyone else, wish to be with somebody that loves and supports me, I have always somehow managed to attract the opposite.

My relationship history has been fraught with rejection, feeling unworthy, and trying harder to win love and approval. Every time I felt criticized or undervalued, I would look inward and ask myself what I could do to make my partner love me more. I always felt as if it was my fault, and when in doubt, I would blame myself.

I’m an overthinker and would spend a lot of time in self-reflection. I came to understand that the trauma I had experienced as a child played a large part in my relationship choices.

Experiencing trauma as a young child leaves a faulty wiring imprint on your nervous system. Instead of developing a secure attachment, the trauma/abuse/neglect causes the brain to develop differently.

I grew up with very little love and affection and never felt valued by my parents.

Children who grow up without consistent care and love learn to cope in various ways. They become hypervigilant of people’s moods around them (so that they can stay out of the way of an angry/moody parent, for example), and they can also learn to disassociate from their feelings because they cannot escape the situation.

I know for sure that I have an anxious attachment style, and I also have low self-belief and self-confidence. This makes me a prime target for toxic partners such as narcissists or other abusive individuals.

It is commonly known that narcissistic types attract co-dependent, insecure types. The root cause of co-dependency is the fear of being abandoned. Co-dependents work hard in relationships to avoid the threat of abandonment. Toxic people, however, don’t respond to more love and attention; it just fuels their abuse.

I knew I needed to break this pattern, or I would never be happy in love. I am now quite adept at recognizing the signs of a toxic person.

Here are the common signs that you’re in a toxic relationship:

They tend to lack empathy (although they know how to fake it for at least the first three to six months) and the world revolves around them, not you.

Of course, people on the autistic spectrum can lack empathy, so this isn’t a guaranteed science, but it is still a sign to consider. My ex found it virtually impossible to put himself in my shoes. He would sometimes say the right things, but his words never really came from the heart.

My ex abandoned me at Heathrow airport because there was an unexpected issue with my passport. Instead of considering how I might feel, he swore loudly and kicked the baggage around and then said he had to go without me because he didn’t want his birthday ruined.

We had planned to fly via Singapore to Sydney. I should have known then that this was the start of many awful episodes to come. Thankfully, I joined him twenty-four hours later after hastily getting a new passport issued, but he dumped me (for the first time) four weeks later.

They will always be at the center of everything they do, and your needs will be unimportant.

Their time and needs take priority over yours. Relationships are all about compromise and consideration for each other. When the give-get ratio is imbalanced it is often a sign that the relationship will not be equal.

If you confront them about this one-sided dynamic, they will either dismiss what you say, ignore you, or turn the conversation around and begin to play the victim.

When I would confront my ex about his selfishness, he would sometimes breakdown and cry and say, “I know I am a terrible boyfriend,” but then he would soon stop crying and life would carry on as it did before.

They will justify cheating on you and lie about it.

A friend told me over lunch one day that she had seen my ex on Match.com for the previous nine months. I felt sick, and when I confronted him, he said that it was only ”light window shopping.” I was an idiot and I stayed. I only had myself to blame for allowing this to continue.

Toxic individuals regard others as objects to be used. I felt replaceable and never felt fully secure in the relationship. Ironically, the one thing that attracted me to my ex in the very beginning was how keen he was on me. I love the way he chased me and the very next day after our first date he called and said, “At the risk of seeming too keen, I was wondering if you’d like to join me again tonight?”

I was flattered, but of course this is a common sign of a toxic individual. They move in fast; they gain your affection and trust very quickly. Once you’re hooked the manipulation and the control begins.

Another thing to look out for is subtle or overt criticism.

My ex would comment on my posture at the dinner table, the way I spoke to friends, the way I cooked, as well as the tidiness of my house. He didn’t like it if I watched television too much and would treat me like a child. He was very controlling, but he never saw that in himself.

Once, on a journey in the car, I saw the funny side (thank goodness I had humor to help get me through) when he said, “I am not controlling, but don’t ever use the word ‘controlling’ to describe me.”

A friend of mine remarked at a later date, “That’s like saying ‘I don’t f#%@ing swear’.” Utter madness!

Emotional abuse can also occur in the absence of criticism, selfishness, and controlling behavior.

Being ignored can be just as painful. When I was stone-walled or felt neglected, it triggered my childhood trauma and transported me back to the feeling that nothing I did was good enough.

In fact, my ex triggered me a lot and made me realize how dysfunctional the relationship was. It’s an interesting cycle that I have come across numerous times: childhood trauma and subsequent toxic adult relationships.

This is what I have learned since finally moving on from my toxic ex-partner:

If someone is too smooth in the very beginning and tries to fast-forward the relationship, I am wary. I would far rather be with someone who was slightly clumsy and forgetful than someone who is super slick.

If they lack friends, that can be a red flag.

Again, this doesn’t happen in every situation, but it can be a sign of trouble to come. My ex-partner had very few friends. He didn’t seem to understand the value of connection and keeping in touch with people unless he needed something from them.

Underneath all of the bravado was someone who was quite insecure and had high standards for himself. I’m not sure that he actually even really liked himself. He would act extremely confident around others and was able to charm others especially when he wanted something from them. Toxic people often boast about their achievements and seem to think they are more entitled to things than others.

What I Have Learned from My Past Relationships

All of my failures in relationships have taught me that the old cliché of loving yourself first is actually true. Instead of planning my life around somebody else’s, I made choices about where I wanted to be and what was important to me going forward.

I have built a strong foundation from which to explore the world. My strong foundation is built on self-awareness of my strengths and weaknesses. I understand why I sought out toxic individuals and have worked on my self-belief and self-esteem. The inner bully (the negative voice inside) is still there trying to tell me what I can’t do and why I need to be fearful on my own but I’m learning to tune it out.

I have made more time for people and experiences that uplift and inspire me as well as focusing on inspirational podcasts and videos. What you focus on becomes your reality, and it ultimately affects your quality of life. I’ve become less accommodating to people who make me feel bad about myself.

Feeling bad about myself is familiar, and I am convinced that previous childhood trauma altered my way of thinking and behaving, and over time it became a habit. The good news is that habits can be changed. We can’t change the past, but we can certainly update our beliefs about what happened and how we wish to see ourselves now.

When you like and value yourself you will be far less likely to take abuse from others. You will also be more inclined to have healthy boundaries and ensure that there are consequences for those that violate them.

Know what you will and won’t accept from others and let others know when they have overstepped the mark. If they are decent, they will be upset that they have hurt you and will make an effort to consider your needs. If, however, they dismiss your needs and feelings, that should tell you all you need to know.

Mandy is a cognitive-behavioral therapist who offers counselling to clients worldwide via Zoom. She believes in spreading kindness: “Being a therapist doesn’t mean that life is perfect—we are all in ‘this soup’ together” as the Psychologist Carl Jung famously once said. She also writes a daily mental health blog featuring advice and information on anxiety, depression, mental health, personal development, and relationships. If you would like counseling, contact her via her website: www.thoughtsonlifeandlove.com

The post How to Spot Abusive People and Stop Getting into Toxic Relationships appeared first on Tiny Buddha.