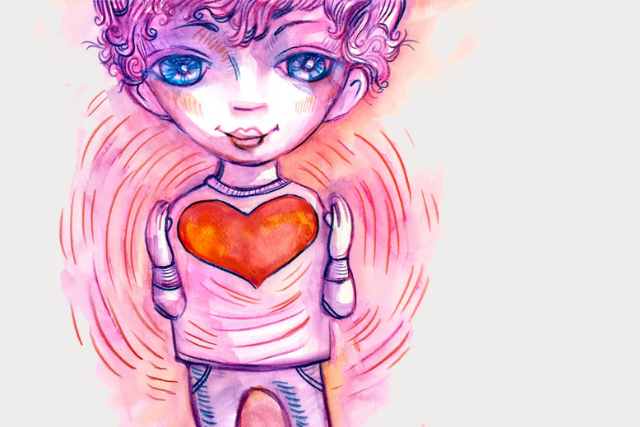 “I used to dislike being sensitive. I thought it made me weak. But take away that single trait, and you take away the very essence of who I am.” ~Caitlin Japa

“You’re making people uncomfortable,” my mother would say. “Stop being so sensitive,” she would then quip.

I have always been sensitive for as long as I can remember. Now I understand there’s a name for it: highly sensitive person (HSP).

The scientific term is sensory processing sensitivity (SPS). As it turns out, 15-20 percent of the population has this trait.

As a highly sensitive person, my nervous system filters less information. I take in more from my environment.

It’s theorized this can often be a survival mechanism set up during early developmental years—particularly if the environment the baby is in does not feel safe.

Often, this can be due to the emotional state of the parents, especially if they exhibit emotional unpredictability or volatility.

This isn’t always the case, but it’s very common. It was the case for me.

Babies can’t regulate their own nervous system. They need their caregivers to attune to them in order to regulate. If they don’t get that, their little systems figure out what they can do to adapt. Like develop a high degree of sensitivity so they can pick up on any threat at the earliest possible moment.

It left me highly emotional. I cried a LOT. And got shamed a lot for it.

I had a hard time with clothes. Seams and tags left me with painful rashes.

I struggled with loud sounds. They were just too much for my little ears (and still are!). And any new, unexpected loud sound still startles me to this day.

I had a hard time with people. Anyone upset affected me deeply, and I didn’t know what to do with all of those big feelings.

It was overwhelming. And I thought something was wrong with me.

I carried shame, guilt, and doubt around with me for years.

I tried to hide myself. Make myself small so no one would notice me. So that I wouldn’t make people feel uncomfortable.

I tried to be who people expected me to be so that I could feel accepted. Because, as a highly sensitive person growing up, I didn’t exactly fit in with my peers. And it left me feeling deeply ashamed of myself.

So I had to be what others were so that I could fit in. That’s how it works, right?

Year after year I did the things that I thought would help me fit in—with my family, friends, and society.

I stayed quiet and kept my thoughts to myself to detract attention.

I tried to mimic what others were doing so that I could appear “normal.”

I prioritized others’ needs before my own, because if I could just make sure others were happy and taken care of, then maybe I would be more likely to be accepted.

I made life choices based on what others wanted and expected, hoping that would lead me to the mysterious normalcy that society advertised.

But I wasn’t happy.

I was overwhelmed, confused, tired, and resentful

I started to get sick.

It started with bone-crushing fatigue. Life felt impossible to get through.

Then the migraines started. It was so hard to think, let alone function.

And then the hives, rashes, and weird swellings that doctors had no idea what to do with.

All non-stop. And none of which could be rectified with any amount of medication. Doctors told me I’d just have to “live with it.”

I figured out through my own investigation that by cutting out dairy and gluten, my physical symptoms improved. It opened my eyes to a whole new way of thinking about my body and what I put in it that I had never before considered.

But the anxiety remained.

That feeling I was drowning worsened. Even though my body felt better. Not great, but better.

It took going through a dark night of the soul to realize that the path I was on was not right for me. It was not my own. I was doing what other people wanted me to do.

And ignoring my own personal truth was destroying me.

I had to make a change. I didn’t have a choice at this point.

I had to find my own True North instead of trying to comply with what others wanted, because it was making me sick.

And what a journey it’s been.

I learned many things along the way, including the fact that I’m an HSP. And that those with HSP have a higher chance of developing conditions of immune dysfunction, like autoimmunity and endometriosis—both of which I also discovered I have.

When the nervous system is highly active, as is the case with sensory processing sensitivity, messengers called inflammatory cytokines can be produced, which cross-talk with the immune system, triggering over-activity and increasing chances of conditions like autoimmunity and allergies, and worsening their symptoms or progression.

What I’ve discovered on this journey is that the best way to help all of it is to understand my nervous system, embrace the sensitivity, and find my own personal True North.

When I stepped into my own uniqueness rather than shaming or hiding from it, everything changed.

It was a journey to get here.

To learn that when others react to me with their judgements and opinions, it’s actually about them. They’re reacting to something about themselves they haven’t yet healed, accepted, or integrated.

It’s not about me at all. It took a long time to learn that lesson. But when I finally did, it liberated me. To follow my own path, despite what the naysayers say. And to take responsibility for my own life, letting go of the need to soothe or heal others. Even if I could feel their pain. Even if they expressed their discomfort.

The only way I could truly find my own healing so that I’m not suffering was to heal me first. To find my own way first.

Focusing on trying to keep others happy and comfortable didn’t work, nor would it ever work.

I learned through my journey that embracing my sensitivity as a gift—as a superpower—is what healed me.

Improving my diet and lifestyle choices has helped me physically feel better. But only got me so far. They are important, but not the entire solution.

What got me the rest of the way was learning to love, accept, and embrace myself for who I truly am, sensitivity and all. Find my own unique path and follow it.

That’s what holds up the light for other souls to follow suit. That’s what can heal the world.

Michelle Dowker, MSc, ND is a Naturopathic Doctor turned Emotional Transformation Facilitator. She is the authority in Social Unconditioning and founder of The Remedy Within: an exclusive & powerful healing approach for women with chronic illness to release what’s holding you back and unleash your inner healer within so you can soar. You can find out more about her here, and don’t forget to follow her on Instagram @wellbalanceND for more inspiring content

The post How I Healed My Body and My Life by Embracing My Sensitivity appeared first on Tiny Buddha.