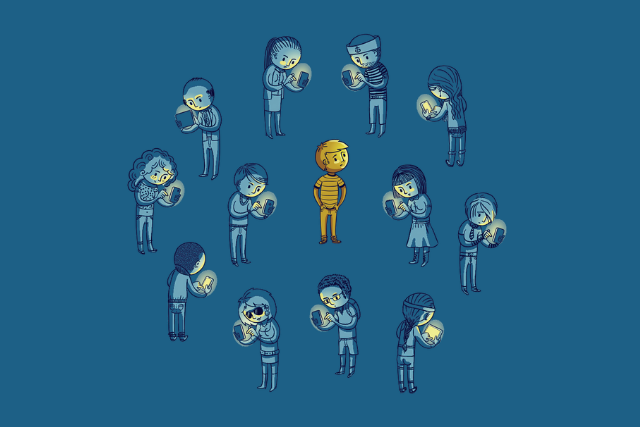 “You wouldn’t worry so much about what others think of you if you realized how seldom they do.” ~Eleanor Roosevelt

It’s natural to think that we’re always in the spotlight.

We think that people care about the way we dress, but they don’t.

We think that people notice our nervous habits, when in reality, they’re worried about whether people are noticing their own.

We tend to go through life as if our every move is being watched, judged, and evaluated on a moment-to-moment basis by the people around us. Here’s a reality check—you’re not that important.

I don’t mean that in a brash way. This shouldn’t make you feel small or inferior, it should liberate you. And if it doesn’t, I have a feeling that what I’m about to talk about will.

The Truth About Funerals

As you guys know, a funeral procession is broken up into two parts: the funeral and the burial.

During the funeral, spiritual leaders read various snippets from religious texts about the meaning of death, and close family members are allowed to get up and say a few words about the deceased.

The burial takes place directly after the funeral, although some religions operate on a different procedure. During the burial, the body is transported outside, and the deceased is put to rest in the grave site.

Now, you’re probably wondering why I’m spending so much time talking about funeral procedures. I’d probably be asking myself the same question reading this article, so here’s the bottom line.

The burial takes place outside on grass.

Do you want to know the number one factor that determines how many people attend the burial after the funeral procession is over?

If it happens to be raining outside, 50 percent of people who attended the funeral will decide not to attend the burial and head home.

That doesn’t mean those people don’t care, just that they’re first and foremost focused on themselves and their own lives and needs, as most of us are. Which means they’re focused on what they’re doing than what you’re doing.

Why would you live life being bogged down by the opinions of others if half of the people attending your funeral will skip the burial because of bad weather?

Coming across this information struck me like a lightning bolt. And no, I’m not going to sit here and lie to you by saying that reading this factoid about funerals led to some life-changing epiphany and now everything is sunshine and rainbows.

What I will say is that it had an impact on my mindset. It forced me to really look at my day-to-day life and analyze where my actions were being driven by the opinions of others.

Realizing just how little people cared about the decisions I made was one of many factors that influenced me to start shutting down the inner critic—that voice that tells you that everything you do is being judged by others.

The Confessions of a Chronic People-Pleaser

For most of my life, I let the opinions of other people stop me from living a rich, fulfilling life.

In social situations, it was more comfortable for me to agree with what was said than express my own beliefs.

It was more comfortable for me to sit back and watch instead of calling one of my friends out for something that he shouldn’t be doing.

It was more comfortable for me to avoid the situations I was afraid of instead of diving into them head-first and stretching my limits. The fear of failing publicly in front of other people was absolutely terrifying to me.

One particular instance from my high school years illustrates this perfectly.

It was my freshman year, and our first dance of the year had arrived. I showed up in all-white, trying to keep consistent with the “white-out” theme that had been planned for the dance.

As the dance started and music started playing, students began rushing to the middle of the gymnasium and dancing their hearts out.

That’s when the fear hit me. My insides felt like they were twisting around each other.

My breathing matched my heartbeat. It wasn’t calm and collected, it was frantic.

My mind went into full “stop him from taking action” mode by conjuring up a bunch of scenarios in which I look like a total idiot on the dance floor.

For the rest of the night, I was glued to that wall. Only thirty feet away, there was a bunch of care-free teenagers having the time of their lives.

I went to the bathroom about seven or eight times just to make the time go faster. I talked to other people who weren’t really dancing, and we were all playing it off like we were too cool to express ourselves in public.

The truth is that we were all just terrified of being ourselves in front of other people.

That moment set the trajectory for the rest of my high school experience. I wish I could go back in time to my fifteen-year-old self and tell him to wake up. I wish I could tell that shy, insecure person that rejection, public failure, and the opinions of other people don’t matter.

I wish I could tell him that at the end of someone’s life, the biggest factor in determining whether or not people attend their burial comes down to whether or not the sky cries more than the congregation does.

But I can’t do that. I can only look forward to what’s in store for me now that I’ve finally realized how unimportant my actions are. It’s not a shameful thing to admit that you’re unimportant, it’s liberating. It gives you the freedom to take risks and challenge yourself.

Life becomes a lot more fun when you realize that everyone around you is so absorbed with their own thoughts and feelings that they couldn’t care less what you do.

So next time you see someone that you want to talk to, don’t let the fear of rejection stop you, go introduce yourself. I promise you that if you embarrass yourself and the conversation goes nowhere, the person won’t even remember your name tomorrow.

The next time you feel the urge to call a friend that you haven’t spoken to in a while, but feel like it might come across as “weird,” I promise you there’s a 99 percent chance that the person will be extremely grateful for the call.

And if the person isn’t grateful and gives you the cold shoulder? Well, let’s just say that you’re not the one with the problem if you’re trying to be friendly and warm and are flat out dismissed.

I encourage you to write down the things in your life that you’re scared to do because you’re afraid of what other people will think. And then each day, cross one of those things off your list.

Constantly remind yourself that everyone is busy thinking about one thing—themselves.

Going through life with this mindset will make you much more likely to face down the demons that are stopping you from living the life you want.

Justin is a young, ambitious self-improvement nut located in the Windy City of Chicago. His passion is to provide practical, action-based advice that people can use to facilitate change in their life. For further advice on building better habits, check out his website here or grab his FREE E-Book: 3 Steps to Creating Better Habits. This thirteen-page e-book will provide you with a step-by-step plan formula for building habits that stick.

The post Afraid of What People Think? Free Yourself by Realizing How Unimportant You Are appeared first on Tiny Buddha.